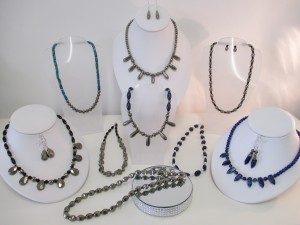 This collection is in honour of all the fools out there. I’ve been called a fool all my life – purely relating to the day of year I was born, you understand.
But a few fools have gone before me – and some of them thought they had struck gold, literally, when in fact they had found pyrite. Due to its resemblance to real gold, the mineral is commonly known as fools gold – and when struck it emits sparks, hence its name. (The Greek word pyr means flame or fire)
Pyrite has been used in jewellery for centuries and was particularly popular during Queen Victoria’s reign.
In crystal healing, pyrite is believed to help combat lethargy and fatigue, to strengthen the circulatory system and be beneficial for the lungs, alleviating bronchitis and asthma. Pyrite is regarded as a protective stone and believed to inspire creativity.
I think pyrite looks great on its own, but I also like to team it with lapis lazuli and chalcopyrite – two gemstones which have flecks of pyrite in them.